Showing posts from January, 2007
Show all

January 25, 2007
So I tend to be on the more extreme side of the testing debate. On my current project I helped institute extensive use of RSpec and Selenium Remote Control. RSpec allows you to test the models, view, and controllers in isolation from each other through the use of a built in mocking framework (to mock out ActiveRecord objects and Stub out call to finders) and some ideas borrowed from Zen Test. Selenium Remote Control allows you to drive a browser (your choice) from Ruby (or most other langs). Which is cool because we were going to have lots of Javascript in this project to control the Google Maps features. The RSpec tests went well: Easy to write once you got a handle on their syntax, and they run real damn fast they don’t hit the database for the view and controller tests (their opinion is that model tests should still hit the db b/c models are so tied to the db it would be silly to test them without it). For the SeleniumRC tests we used RSpec as the harness and created p
1 comment
Read more 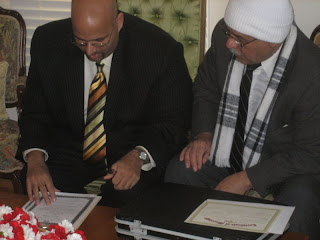 Getting married requires paper work A lot of paperwork: Huda , his wife Uzma , and Huda's parents Andy's not so sure about the other Andy. I kiss my wife Their first dance as married people. My wife and some drunk guy we met. The ladies of the family Take more photos!
Post a Comment
Read more

In which I complain about air travel

January 22, 2007
So I work in Atlantic Beach , FL and I live in Chicago . So that means I spend a bunch of time on a plane every week. But this week I was best man in a wedding… in Seattle , WA . You know, the exact opposite corner of the lower 48 and not so easy to get to, as it turns out. I had cleverly arranged to connect through Chicago so I could meet my wife at O’Hare and then fly together to the land of coffee. But, of course, my plane was delayed. I got off the plane at O’Hare at 5:12 pm to make a connection at 5:15. Now I’m a large man these days but I did manage to run from the C concourse to the B in about 6 minutes – about 2 minutes too late to get on that plane. And all the flights to Seattle that night? Full. So my lovely wife gets to spend a night alone in Seattle while I sleep alone in our bed in Chicago . Nice. Then it’s up at 4am to catch a 6am to Denver , to catch a flight to L.A. , and then off to Seattle . As I type this I’m sitting on a plane in Wash
Post a Comment
Read more

January 18, 2007
So for about 2 months I’ve been working on this project with Clint Bishop and Nick Drew. Nick was the Project Manager/Tester/Technical lead and build guy. Clint and I were developers. Now that this project is being handed off to a new team (headed by Obie Fernandez), Clint and I have been working with developers other than each other. This is always a tricky thing because you have to justify the code you’ve written while working to make it better. Even more interesting is that Clint and I are around the same level of Ruby/Rails experience while Obie and Zed (Shaw) are superstars. Not only do they have a long history in the Object Oriented field but they have been doing Ruby professionally for a while now. Now I’ve been on a Rails project before and I’ve been messing with RoR for more than a year so I’m no chump, but I’m definitely behind the new guys. I was working with Zed for a few days last week and he’s just crazy fast. First of all, he has this behemoth HP l
Post a Comment
Read more

How did I get here? 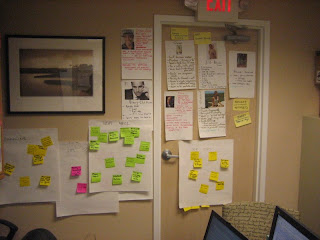 So there's only one more week left before this project goes live. But how did it start? Well, oddly enough, with arts and crafts. See those faces in the above photo? I, and a bunch of professional consultants, went to Walgreen's , purchased fashion magazines, then cut out and pasted pictures onto paper. Sounds kinda dumb, huh? Well it's not -- lemme try to justify: In our talks with the client it's often helpful to focus on who's going to use the software so that only features for your intended audience get in the code. Also, it helps keeps you focused on who you're developing for. If everyone agrees that, to pick an example, Disco Stu is going to drive the content creation of the site then you might want to think about what he would like and what would annoy him. Why call him "Disco Stu"? Because "20 something bar patron" is boring. And if you're going to be spending a 1-2 weeks discussing what Disco Stu would want in a websi
Post a Comment
Read more

Mechanical Turk can be beaten

The End to End Example